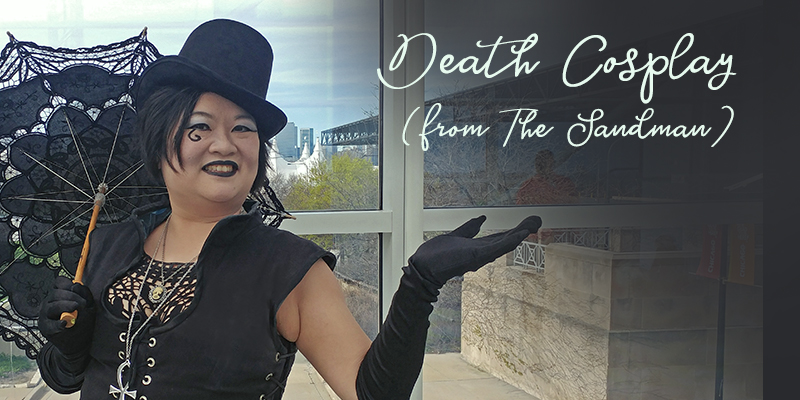 One of my favorite authors of all time is Neil Gaiman.  Not only do I love getting immersed in his stories, I immensely enjoy his personality (gleaned from interviews, his blog, and social media).  My introduction to the author was a comic book series he wrote called The Sandman.  It was probably the first comic series I read regularly as a teenager (in the 1980's and 90's).

I like to cosplay as the character Death from The Sandman and have done so a few times now.  There are two different looks for her that I use, since she makes appearances in different styles throughout the series.  These costumes don't involve any actual sewing or crafting on my part.  For this character, it has been a matter of assembling the right clothes and accessories and doing just a little makeup.  (I seem to be drawn to makeup intense cosplays, like Ursula.)

The character still shines through.  I've been recognized and complimented on both versions.  Since the character isn't very mainstream or current, the appreciation for her is so much greater and genuine when she is recognized. That's one thing I love about cosplay - the instant bond with perfect strangers who share a love for a story or character.  (I've mentioned it before, but I really love Adam Savage's TED Talk on the topic.)